YOUR LOVE GOES ON
AND ON AND ON
(Love Goes On)

“Your unfailing love O Lord, is as vast as the heavens;
Your faithfulness reaches beyond the clouds.”
Psalm 36:5 (NLT)

Ever noticed how when people talk about how much a famous sportsperson earns, they use the word ‘worth’? Tiger Woods, for example was ‘worth’ 78 million last year. Kobe was ‘worth’ 62 million last year. LeBron was ‘worth’ 60 million. It happens with movie stars too. TV hosts are always saying things like: (insert cheesy TV host voice here) “Coming up after the break, we’ll take a look at the the new Avengers Movie, where actor Robert Downey Jr delivers a stellar performance worth a cool 50 million dollars.”

Then there’s the makeover shows. Somebody’s always getting their home renovated or their hair styled because they’re ‘worth it.’ And of course there’s the school lunchtime conversations, where someone is counseling a guy/girl with a broken heart and telling them “You deserve better. You’re worth more than this.”

If we are honest, how much we are ‘worth’ is a pretty big deal to us. We all want to be valuable… it is just one of the basic feelings that’s common to humans! Where we differ, though, is in HOW we decide to measure our ‘worth.’ Some people look to the rewards of the world- money, clothes, and stuff- to decide how valuable they are.

Others allow other people to decide what their worth is. We’ve probably all met someone who allows somebody else to treat them badly, as though they didn’t think they had enough value to expect anything else. Many people today carry a secret concern about their value that has stemmed out of the rejection or abandonment of one of their parents. No matter how cool we play it, the truth is that the issue of our value is a really big deal to our sense of identity.

We’ve all heard John 3:16 and many of us can recite it by heart: “For God so loved the world that he gave his one and only Son, that whoever believes in him shall not perish but have eternal life” (NIV). But many people haven’t really connected the dots about what verse actually says about our value.

It tells us that GOD HIMSELF became a human and died and then rose again from the dead…and then it tells us WHY.

That is how much He loves us. This is how valuable we truly are. GOD thought that we were worth dying for. He was prepared to wrap His divinity in human flesh, die and be raised from the dead, so that we could have relationship with Him. He did it for those who would choose to follow Him and He did it for those who would choose not to follow Him. He loves us equally, regardless of what we have or haven’t done, and what we do and don’t have. Money, status clothes… our stuff is irrelevant when it comes to God’s love for us.

So, today, whenever a question about your value comes to mind, don’t just let it run free. Catch it and remind yourself how much God loves you. And maybe even forward this devotional on to a friend who you think needs a little that they are valued by a God whose love is so big that it goes on and on and on. 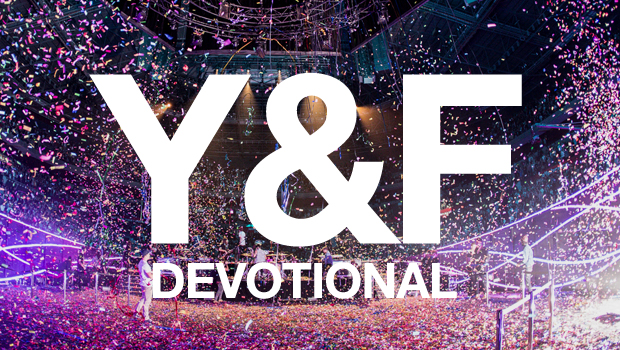 Y&F Day 16
Imagine if we started going around telling people we are 'citizens of heaven.'
Young & Free

Y&F Day 14
How amazing it is that Jesus loves us with no conditions! In fact, he CHOSE to love us before we even had the option of loving Him back. Crazy hey?
Young & Free

Y&F Day 13
On any given day when we turn on the news we are bombarded by images of destruction, chaos and devastation.
Young & Free