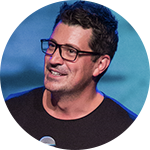 I just visited the northern border crossing of Greece. Over 850.000 people crossed this border in 2015 in search of safety & freedom. I am so moved by the real life stories. Forget the headlines trying to sell papers or induce fear; meeting the people behind the stories & seeing the faces behind the countless statistics is a whole other thing. I want to share some of these stories with you and hope and pray that you will join us in being part of the change.

See this video for more details of how you can make a difference by donating your old smartphone this Sunday at church. 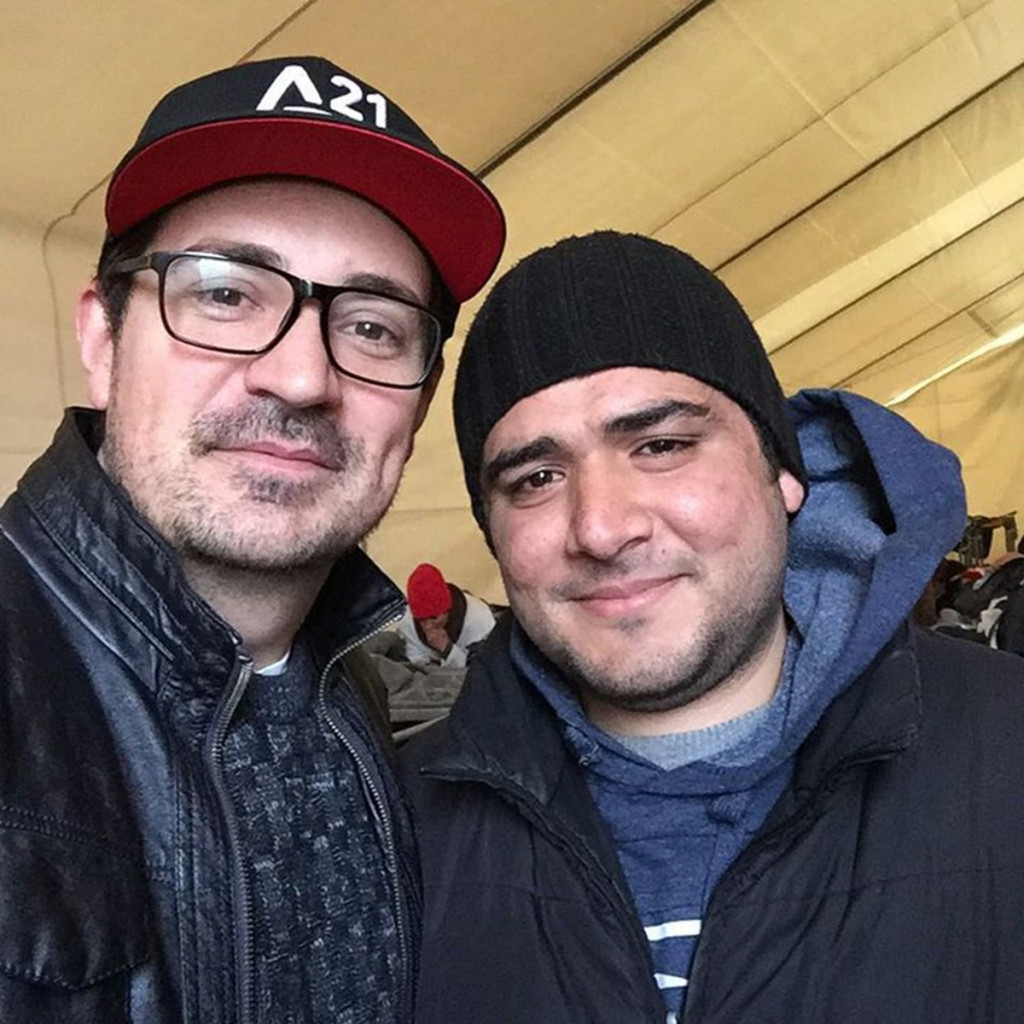 “One of the biggest arguments the right wing uses against helping refugees is that they are just “opportunists” & just want to move to Europe. After a day at the border in Greece I didn’t meet one!

This is Sameer. He’s 27 years old. He and his 16 year old brother have been on the run for 2 months. He fell overboard on the boat and unfortunately lost his phone but there is a great comradely in the camp of people helping each other. He lost his 24 year old brother in a bombing attack recently. As he said ‘In my home town Damascus (Syria) bombings & death is normal and part of every day life.’ His other brother was taken by government forces and is being starved until he agrees to fight for them. His parents are too old to travel. He would love to get to Germany to get enough money to fly his parents out of that situation.

When I asked him if his dream was to live in Germany, he looked confused & got teary. ‘Everyone always want to live in their home country. Syria is my home. It is where my friends and family are. Germany means nothing to me but safety. But I hope by God that this war ends soon so I can go home. Syria is so beautiful. You come and visit me once this war ends!’“ 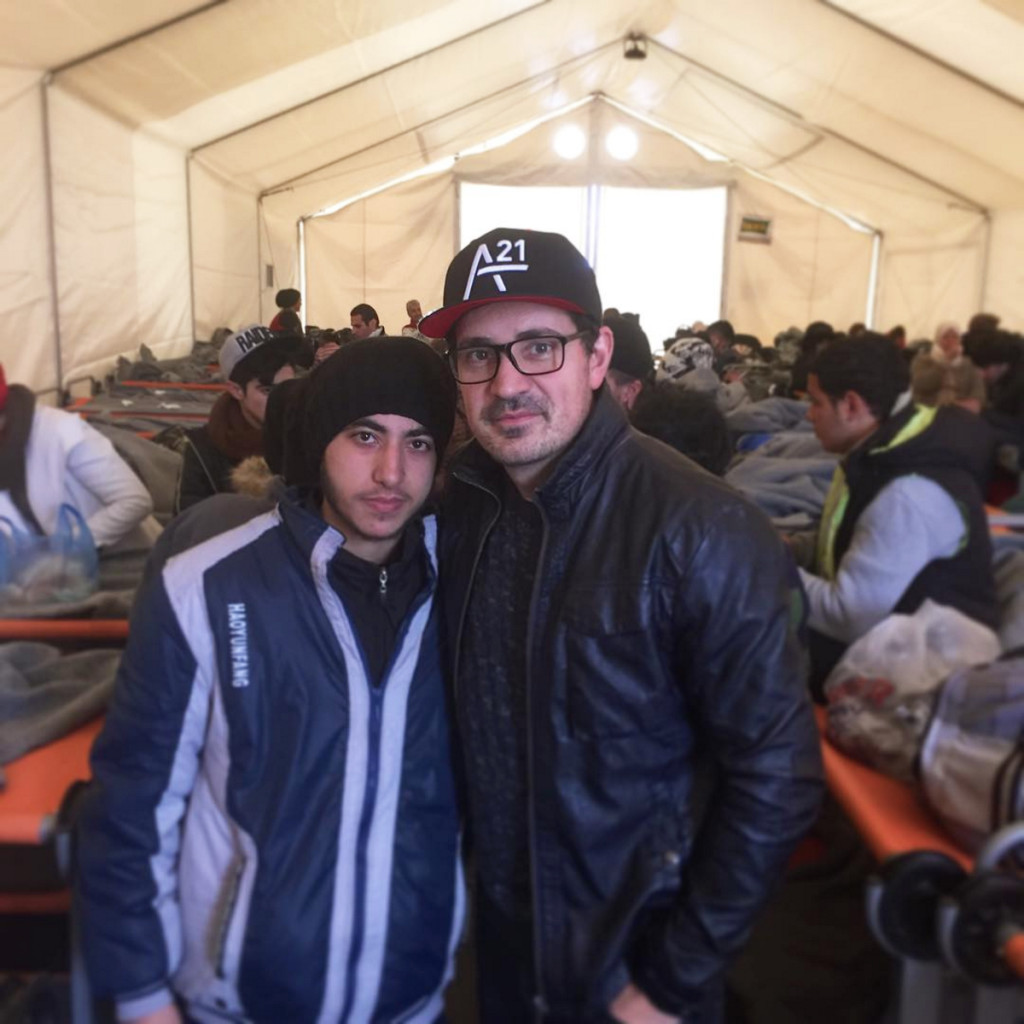 “This is Mohammed. We are in one of the tents that has 200+ bunk beds. This particular tent is lucky because today is their turn to be processed and cross the border. Mohammed is 17 years old (turns 18 in 2 months). Been on the run for 6 months. Spent several months in Turkey but was abused for being a foreigner. His parents only had money to send one of their children away.

The news would classify Mohammed as “an able bodied young man who should have stayed home to fight for his own freedom”. People like him were actually a rare sight in this tent filled with older people & parents with children. His parents sent him because they thought he would have the biggest chance of surviving the ordeal of the trip and make it across. His dream is to go to Germany (Munich) and become a doctor.“ 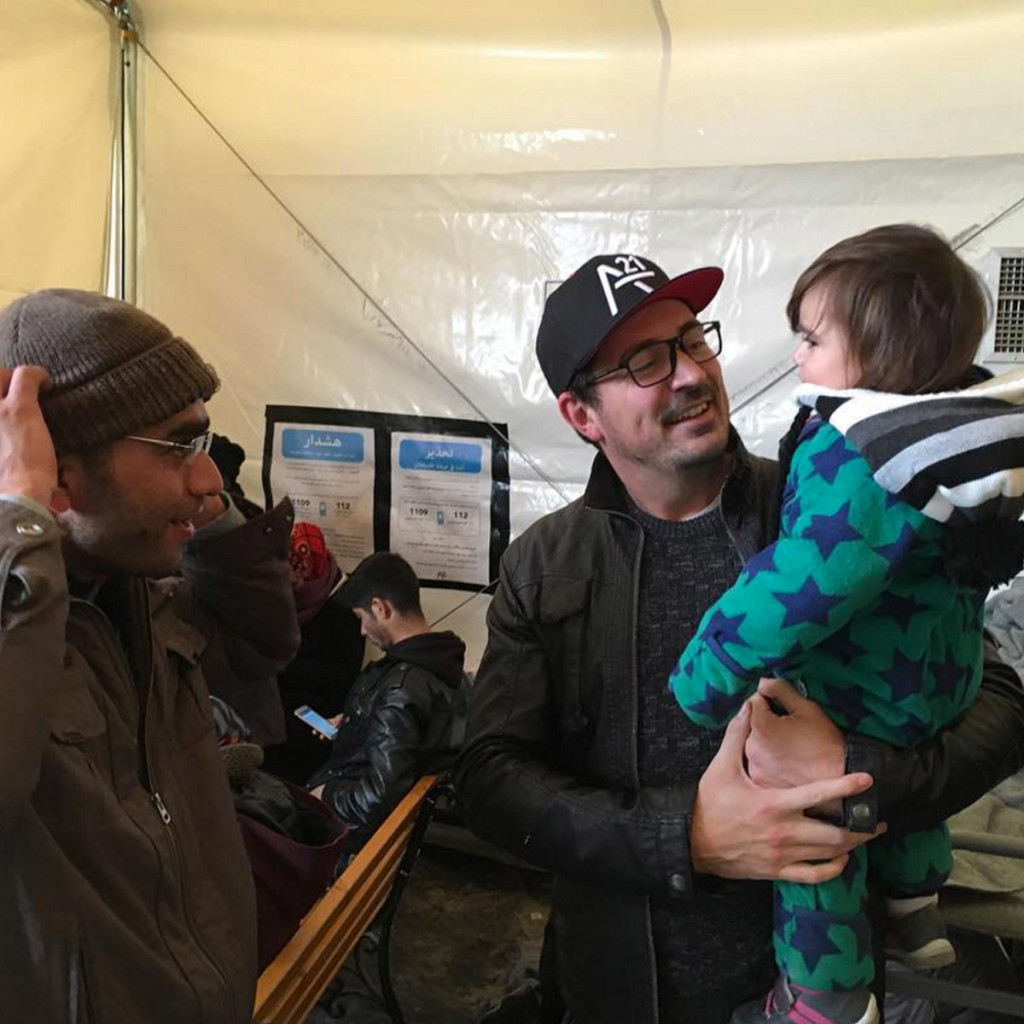 “This is Mahmoud and his beautiful 1 year old daughter. This broke me. Mahmoud is travelling with his mother, wife & 4 kids. One thing is to be here as an observer or in the name of an organisation but to talk with these parents as a daddy myself changes everything. For five days they have shared a bunk bed between them. It’s a rare heroic effort for any dad to get all four kids across on a boat.

Many find themselves knocked or pushed overboard and must choose which of their children to save. Mahmoud was not angry but sad and most of all tired. Hasn’t had a deep sleep for months, as he is always checking on the kids and their papers, money and passports. And every day he is faced wth the impossible task of trying to explain to his kids that the only reason they are in this situation is because they happen to be born in city and country where they are forced between two extreme bastions of “truth” fighting each other with innocent civilians becoming the collateral damage. Mahmoud is a good daddy and I pray for peace for his family!“ 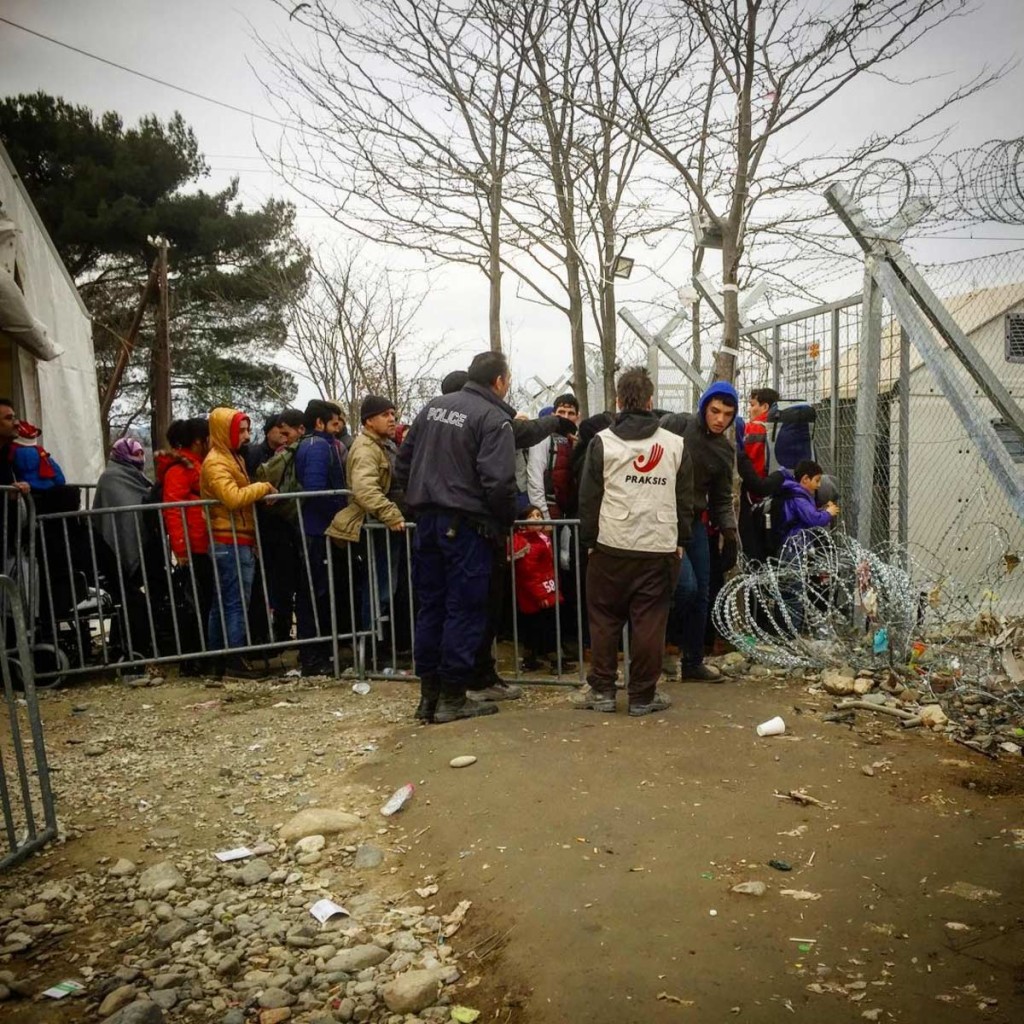 “So close. As people arrive on the beaches and borders, they get registered and placed in groups of 50 and put on busses and sent to this border crossing. Once determined if they are truly refugees and not “just” immigrants, they then get a number and wait their turn to cross (one group gets to cross every 1/2 hour). From there, they buy a train ticket (if they have 25€) and try and find a place where they can live till it’s safe to go home again. The frustration is evident as officials are trying to communicate instructions in English and Greek and simple hand gestures.“

“So many impressions and heartbreak yet also a sense of hope that we CAN make a difference. SO proud of Hillsong Copenhagen for not just sitting by idly but putting their money where their heart is and supporting both UNHCR and continually A21, who are doing so much for so many!!! For the last 3 months, for example, 300.000 people have walked through this water station container designed by Phil Hyldgaard and A21 Greece to wash themselves and refill their drink bottles. In these situations it doesn’t matter what your passport says, a human life is a human life and we should help just because we can!“

We can’t do everything – but we MUST do something! We can be part of the change by both praying for these situations and the people caught up in this crisis and by supporting organisations working on the front lines like A21.

This Sunday, we’ll be collecting old smartphones at Hillsong Copenhagen and many churches across Europe to be a blessing to refugees, for whom it is not merely a phone – but a lifeline!

– Smartphones are preferred so internet access is possible
– Phone needs to be in working order
– If you have the charger as well, it is preferred
– Reset the phone so there is no code on it and no personal content
– IF you have a spare travel adaptor as well, please bring that as well 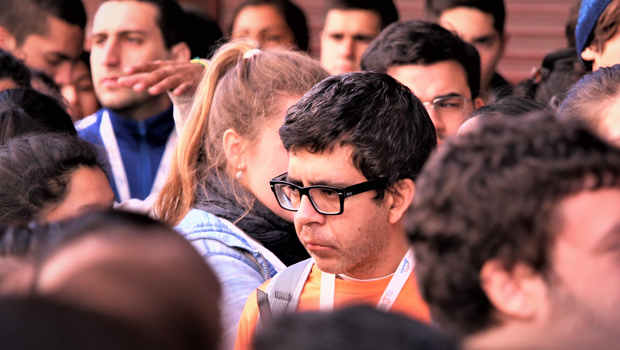 Out of Place
Have you ever felt out of place? Ever walked into a room and thought, I don’t belong here?
Thomas Hansen 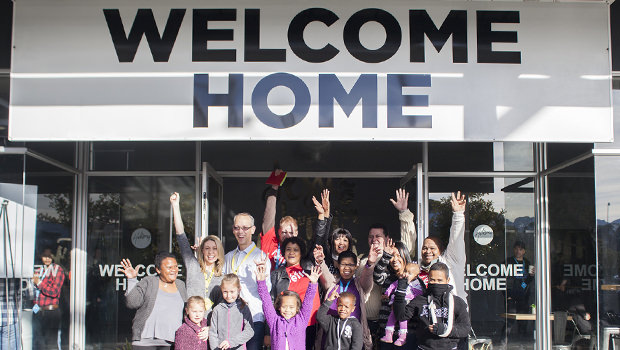 3 Foundations of a New Campus
Launching a new campus is a great opportunity, but also a great challenge.
Thomas Hansen 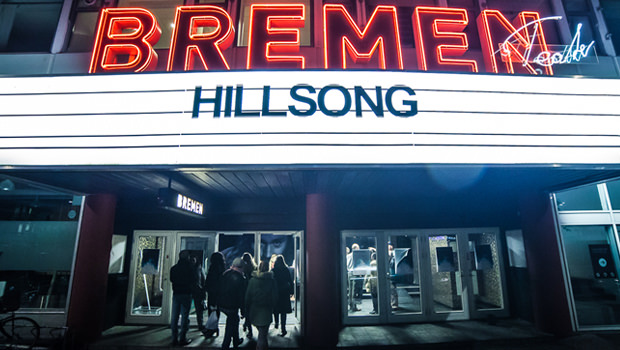 5 Questions You Must Answer Before Launching A New Campus
Launching a new campus is a great opportunity to enter new territory and see people come to find Jesus.
Thomas Hansen